If you saw “Slumdog Millionaire” and watched the recent terrorist drama unfold here in Mumbai, you’ll have already seen where we spent this Sunday. As we sipped our 500 Rupee (GBP6.50) beers at the luxurious Taj Mahal Hotel on Colaba’s waterfront, it wasn’t lost on Lajpal that we’d just experienced two extremes of life here in Mumbai - the Dharavi slums this morning and five-star opulence this evening.

We’d actually arrived in Mumbai on Saturday morning. Lajpal had taken a 75-minute flight down from Udaipur and had met me when I arrived by Jet Airways from London. It was great to see him again, looking very relaxed after his past few months of hard work preparing for exams that he’d finished only a few days before.

Mumbai hadn’t changed much in the past couple of years - still chaotic, ever-growing, hot... The Suba Palace Hotel was much the same too - the same toothless doorman, lethargic lift, and helpful reception staff. The rooms had been refurbished since we last stayed here in 2007 and now boasted free Wi-Fi, as well as complimentary tea and coffee facilities and very un-Indian comfortable, soft beds. Lajpal and I caught up with each other’s news, then ventured out on foot to see a few of the sights, starting with a late lunch at Leopold’s Café, a well-known haunt of locals and foreign visitors alike. We sat upstairs in the noisy bar, next to one of the many windows with bullet holes from the terrorist attack. Afterwards, we continued to the Gateway of India, the Maidan Oval - where there were seemingly 20 cricket matches in progress at the same time. 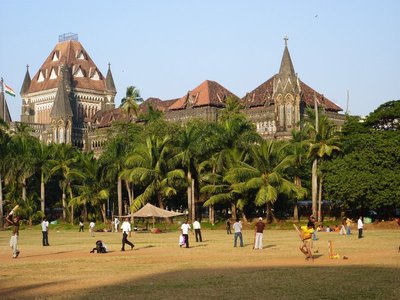 As the sun went down, we halted a while on Marine Drive. We got hopelessly lost on the way back, but somehow still found time to do last-minute clothes shopping and have dinner at a Chinese restaurant. 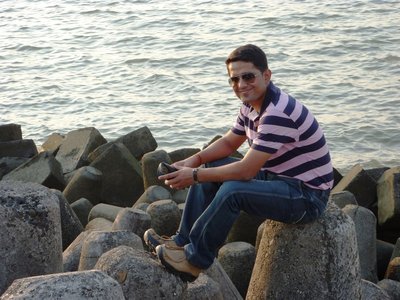 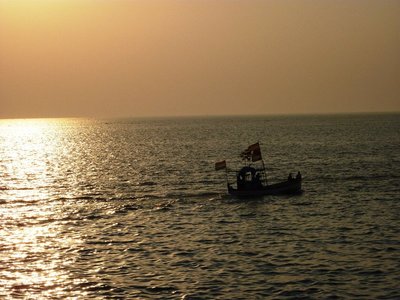 On Sunday morning, we were collected bright and early by a guide from Reality Tours & Travel for a private full-day’s sightseeing tour of this sprawling metropolis. Our first stop was at the Dhobi Ghat, the enormous outdoor laundry where clothes and bed linen from all over the city find their way to be thrashed clean and, as if by magic, find their way back to their rightful owners. The pictures below give only an impression of the activity here; it’s apparently even busier on a weekday! 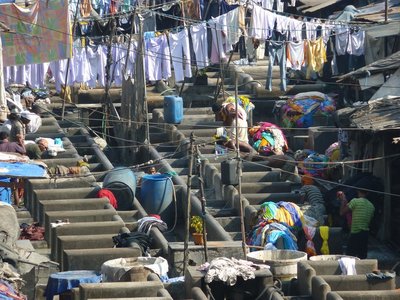 Then it was on to Dharavi, the largest slum in Asia, home to over a million people and, indeed, the former home of our guide for today. I’m not sure what I was expecting to see - perhaps abject poverty and everything that goes with it - but a pleasant(ish) surprise awaited us. 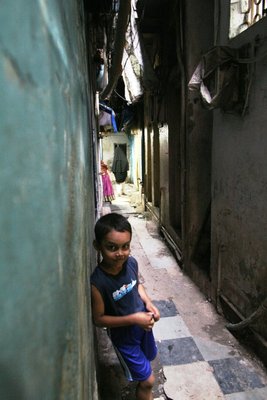 Dharavi - only with a guide could you navigate your way through the maze of alleys.
Photo by courtesy of Reality Tours & Travel

Plastics, metal and cardboard are brought here from all over India and, indeed, from other countries too, to be recycled. It’s well organised. Plastic, for example, arrives in all shapes and sizes, is sorted, chopped up (using machinery that’s also manufactured here), cleaned, melted down, coloured, turned into pellets and sold on to the plastic moulding industry, both in India and overseas. 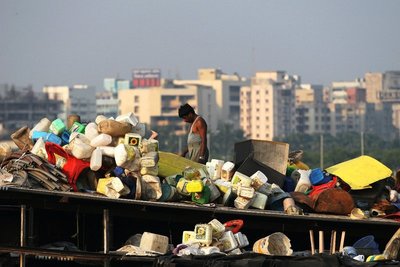 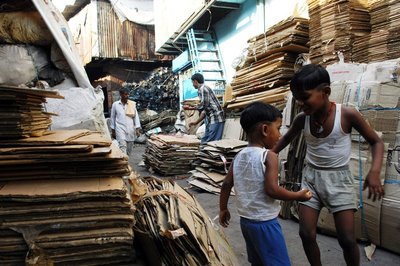 Metal paint cans and cardboard boxes seemed to be cleaned, mended or remade rather than being crushed or pulped. Clay pots are made by hand on a traditional potter’s wheel and fired in ovens fuelled by waste fabric, which is cheaper than wood. As it was Sunday, we couldn’t see fabric being dyed or sewn into garments, although we were fortunate to see some fabric being expertly hand-printed.

All this was happening in extremely crowded conditions but with some essential services, like water, electricity, primary schools and toilets, being provided, or at least sanctioned, by the government. It’s a self-contained city with its own shops and markets, and distinct areas for the Muslim and Hindu populations. Open drains, masses of electricity cables and overhanging buildings were a constant challenge wherever we walked through the narrow alleyways, as were the smells of burning garbage, industry at work, and dirty water in the drains.

We met a friend of our guide and were welcomed into his home. He, together with his wife and two children, live in a tiny room with brick walls and just enough space for cooking, sleeping, watching the television that sat on a shelf, and running a graphic design business from a computer in the corner. Enterprise is alive and well in Dharavi!

Everywhere, children and adults would greet us with a smile and a respectful ‘how are you’ - unlike elsewhere in the city, outside of the slum, where tourists are constantly hassled and a ‘hello’ is more often a precursor to an invitation to buy something.

I had feared Lajpal’s reaction to visiting a slum of this magnitude - would he be repulsed, embarrassed, ashamed even? I had worried unnecessarily. He had found it enlightening and educational. It was certainly an eye-opener for us both.

Correctly, as this is not intended to be a tourist attraction, Reality Tours & Travel have a no photography policy within the slum. Since originally publishing this blog, however, I have been given permission to reproduce here some photographs provided by them and which will give a flavour of what we experienced in Dharavi.

We took lunch at a vegetarian restaurant and spent the afternoon visiting some of the other tourist sites around the city, including the red light district, Mahalakshmi Temple, Malabar Hill, BangGanga tank, the so-called Hanging Gardens from which there’s a good view over Chowpatty Beach and the city, and The Gandhi Museum. It was a very interesting day and we would heartily recommend the full-day tour, and the visit to the Dharavi slum in particular, to all visitors. 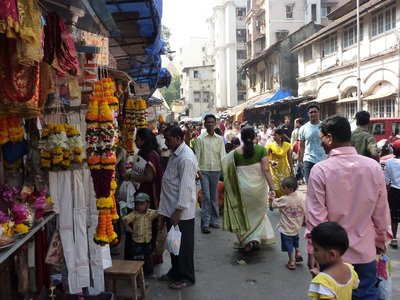 On the way to Mahalakshmi
It was a Sunday and the entrance to the Mahakshmi Temple was so crowded we never actually reached it. 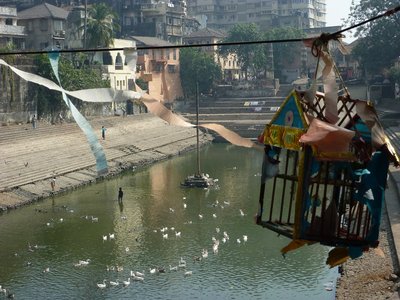 Bang Ganga. The Ganges (Ganga) was said to have come up here and this is now a place of pilgrimage that's not on every tourist's itinerary 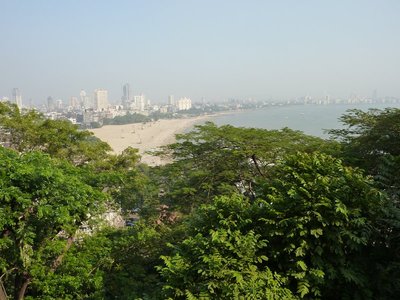 In the evening, we strolled around the corner to the Taj Mahal Hotel. Security is now extremely tight here with armed guards, bag and body searches, and security arches and wands (shutting door after horse has bolted), but we entered to polite welcomes from the hotel’s staff. 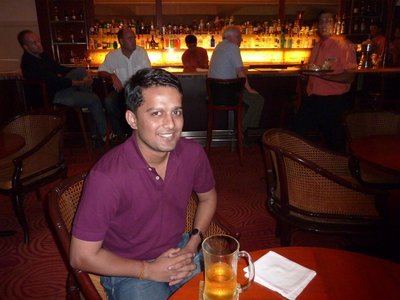 After a leisurely pint of draft Kingfisher in the glitzy bar with one of the largest television screens you’ll find anywhere, we went looking for dinner.

We found it a few minutes’ walk away at Gokul Restaurant, a cramped and busy place full of locals and only a few foreigners, next to a renowned open-air street-food place with enormous queues on this Sunday evening.

The price of the Taj Mahal Hotel’s two beers could have bought at least ten of the very good, substantial curry and rice meals we had here!

Previous Next Table of contents

I really love how whilst you recognise adversity in India you don't focus on it but merely mention it as being the reality for many people. Especially with you being such a gent, you don't dwell on it but really reap the benefits of this amazing country. This sounds like a very interesting day, one that I would find perfect in my search for getting insights into the lives of people during my travels.

Oh meant to ask, did you take this young man's hand? Just asking!

Katie,India's people are proud, humble and industrious - and so accepting of their position in life. I'm actually quite envious.

And, yes, I've held this handsome young man's hand many times - wouldn't you? As I've said in another blog somewhere: it's a sign of friendship, nothing more - and, when in India, do as the Indians do!

Katie, you can read more about how I came to know this young man in one of my early (2009) blogs: https://pintusfirsts.travellerspoint.com/2/

I've known him since 1997. I'm now an honorary member of his family and have been to marriages of two of his cousins, as well as to his own.

Comments on this blog entry are now closed to non-Travellerspoint members. You can still leave a comment if you are a member of Travellerspoint.

If you aren't a member of Travellerspoint yet, you can join for free.