This blog is published chronologically. Go straight to the most recent post.

I've been trying to work out exactly when I first travelled to India and how many times I've been back - and why?!

My research took me back to my old passports (the Passport Office used to be quite happy to cut off the corner of your previous document and return it to you with your new one). My very first passport was issued in April 1962, in the days when I was carving out a career in the travel industry and rubber stamp manufacturers were making pots of money from immigration authorities. The visas and entry or exit stamps in that first passport, of all shapes and sizes in a variety of colours, some of them duplicated and triplicated from several visits, were from France, Belgium, The Netherlands, Malta, Greece, Morocco, Kenya, Yugoslavia, Norway, Tanzania, Malaysia, Iceland, Antigua, St Lucia, Uganda, Singapore, Hong Kong, St Vincent, Indonesia, the Congo, Lanzarote, Tenerife, and Madeira, plus a few others I can't decipher.

My second passport added more Hong Kong stamps, Thailand, The Gambia, more Greece and Canary Islands, Senegal, Cyprus, Tunisia, lots of mainland Portugal and Spain, the USA - and, hooray, India! The stamp says 'Delhi Airport Departure, 20 April 1973'. I remember it now - it was with Pat, my wife, on a short trip for the opening of the Hotel Oberoi Sheraton. We flew to Bombay (although, strangely, there isn't a stamp in my passport to confirm that) and had an open-air breakfast banquet with the legendary Mr Oberoi himself at his ranch - and a ride on one of his camels! Then, we fitted in our first visit to the Taj Mahal, before flying back from Delhi. 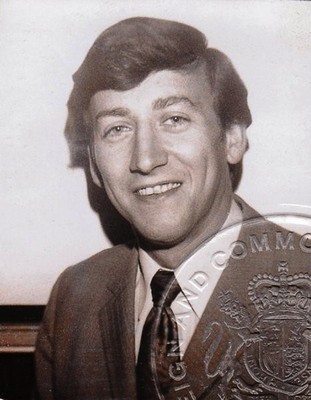 Yes, it is me!
Sir Vivian Fuchs once said: "If you look anything like your passport photo,
you aren't well enough to travel". I think I looked okay in my 1972 passport
- but the years since have been very cruel!

How many times I've been to this great country since then is more difficult to confirm; the rubber stamping routines started to be abandoned and the first of my EU passports wasn't returned, so points of reference are few. If my memory serves me correctly, however, it's at least five more times. When I was important, in the pre-blog era, there was my tour as a guest of Air India and the Indian Government Tourist Office that took me First Class to Bombay, Aurangabad, Hyderabad, Bangalore and Madras. I was smitten with the country from that day on. I persuaded Pat to spend our Silver Wedding Anniversary in 1997 on a tour of Rajasthan. We still have the diary that Pat kept of that trip - perhaps I'll convert it into a blog some day. Anyhow, I thought it was wonderful, but Pat vowed never to return because of the heat, sickness and spicy food we encountered. Despite everything, I fell in love with the country, helped a young man we met on that tour with funding for further education, and returned alone in 2006 to meet his family and visit Goa (if you haven't already seen it and have the time and inclination, you can read about it in Where else...? and in the entries either side of it). I was privileged to attend his cousin's fabulous wedding in 2007 (It's a long way to go for a wedding!) and went again later that same year with colleagues on a business trip to Bombay, Bangalore and Delhi, which we extended by adding a quick but memorable tour to the Taj Mahal and Jaipur afterwards. So, six visits in total so far.

Now to the 'why?'. Well, I've been fortunate to visit quite a few places around the globe - and even more fortunate that most of those visits were made at someone else's expense! I enjoyed all of them. However, there are some that I enjoyed more than others and India happens to be at the very top of that list. Of course, one has to make allowances for the fact that it's not like home, so there are quite a few 'why nots?' too... It's overcrowded and poverty is obvious. It struggles with things like rubbish disposal, sewage and hygiene. Animals wander at will. Bureaucracy drives you mad. With a few exceptions, tourist sites are poorly maintained. Shopkeepers, kids and scammers hassle you constantly. Traffic is a nightmare and road conditions are awful.

However, if you can put all these apparent deficiencies to one side, or at least learn to tolerate them as I have, you'll have a more positive view of what is a truly fascinating, wonderful, vibrant country... Its culture is richer and more varied than any other I've visited. Its people are happy, proud and generous. Its traditions, religions, myths and legends are bewildering. Its architecture is stunning. Its food is terrific - nowhere else can make things like boring pulses, bland potatoes and even nasty cauliflowers taste so good. It's a place where you can eat, sleep and be merry for relatively little money. Colour, noise and smells are all around you from the moment you step off your sanitised aircraft. There's a photograph waiting around every corner. There's nowhere else quite like it. It's magic, and I love it.

So, here I go on my seventh visit. First to Bombay (Mumbai) again on 30 October. There, I'll meet my young friend Lajpal (aka Pintu), who completed his education with a Master's in Political Science and now has a good job in local government. Then it'll be off to the very southern tip of the country, to Kerala - literally the Land of Coconuts, or "God's Own Country" as their tourist office prefers to call it - for almost three weeks touring bird sanctuaries, tea plantations, spice gardens, wildlife reserves, beaches and backwaters. We'll also trip over to the neighbouring state of Tamil Nadu to visit a fantastic temple in Madurai then continue down to Kanyakumari, India's equivalent of Land's End. Our travel from Mumbai to and from Kochi (Cochin) will be by air. We'll have a private car with a driver for about 11 days and, on the backwaters, we'll spend two nights on a converted rice barge. 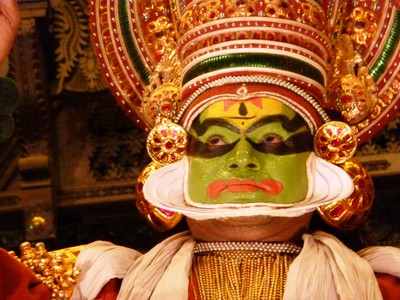 We'll see demonstrations of kathakali dancing, martial arts, boat building and coir-rope making, and we might even try an Ayurvedic massage. Our accommodation will be in mid-range hotels, tented camps and homestays (B&Bs). We expect some rain in the hilly interior of the Western Ghats - it's towards the end of the retreating north-easterly monsoon there - but hopefully we'll have some sun and dry weather too for hikes, sightseeing among tea plantations, adventures on bamboo rafts and in kayaks, and for sunbathing when we reach the beaches of Varkala. 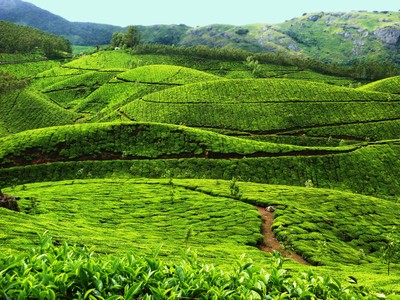 Join me for what promises to be a holiday to remember - internet connections permitting, my blogs are likely to be many and frequent.